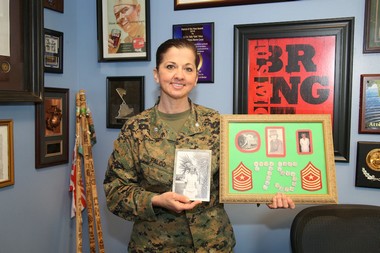 Falco was still in high school in 1987, and she chose to take the Armed Services Vocational - Aptitude Battery (ASVAB) to get out of one of her classes. She was surprised when days later, a Marine Corps recruiter visited her at school. When he pulled her out of class, she said she saw his dress blue uniform and the blood stripe on his trousers, and the first words she said were, “I’m that good to get into the Marine Corps?”

Falco was not old enough to sign her own enlistment papers, so her mother co-signed her six-year contract for the Marine Corps. She stepped on the yellow footprints at Marine Corps Recruit Depot Parris Island on November 2, 1987.

At the time, recruit training lasted only 11 weeks for women, and they were not required or allowed to complete any warrior or combat training.

“Coming in in the late ‘80’s, we ran a mile and a half on the [Physical Fitness Test], so the men already saw that we were doing half of what they were doing,” Falco said. “I found once the PFT was changed to three miles like the men, I could see things already balancing to where those expectations weren’t really there anymore.”

Today, women are required to participate in the same Marine Combat Training as male Marines. Women are also eligible for all occupational specialties, including combat arms specialties. Women recently arrived at MCRD San Diego for training for the first time in its 100-year history.

“Nowadays, it’s amazing to see the changes as we’re integrating, having males and females in boot camp together,” Falco said. “I see females and males as equals, and I love all the male Marines like my brothers and the female Marines like my sisters. . . It’s so important to unite us.”

After graduating recruit training, where she was meritoriously promoted, and field radio operator school, Falco was briefly stationed at Marine Corps Base Camp Pendleton, California, before moving to a new unit in Japan. At Camp Pendleton, she stayed in an all-women Marine barracks, which was the first permanent barracks ever established for women and also the last of its kind. Following her tour in Japan, Falco returned to Camp Pendleton.

It was during this time that she married and gave birth to her two daughters, Lorretta and Gabriella, one and a half years apart.

Unfortunately, her marriage was short-lived, and Falco soon became a single mother.

Falco learned to balance her family life and her career. In fact, despite the challenges that came with single motherhood, she has served almost a third of her Marine Corps career, more than 10 years, outside of the United States.

These 10 years are an accumulation of her time stationed in Japan, Bahrain, and Germany; her deployments to Somalia, Iraq, and Afghanistan; and her time spent on multiple overseas exercises.

“As a single parent, it was extremely difficult, but it could have been more difficult,” Falco said. “I chose to be a mother, and I’m so grateful. It was very hard deploying unaccompanied, touring overseas, and leaving my daughters, but that is one of the many things I love about the Marine Corps, is the camaraderie. I could have never done it without my fellow Marines.”

After 14 years of active, enlisted service, Falco’s determination and her dedication to the Marine Corps was evident to her command. She was a staff sergeant looking toward her next promotion when her command nominated her for the Meritorious Commissioning Program so she could become an officer.

Falco attended Officer Candidates School and commissioned as a United States Marine Corps officer in August 2001, just a month before 9/11 and the beginning of the Global War on Terror.

Falco’s time as an officer has been characterized by multiple, invaluable achievements. She graduated from Park University Magna Cum Laude, earning a Baccalaureate of Science degree in Social Psychology and a Baccalaureate of Administration degree in Criminal Justice. She was the first ever Marine Corps Sexual Assault Response Coordinator of the Year. Combined with her enlisted time, Falco has been an honor graduate of seven Marine Corps technical schools and courses. She is also the recipient of the Defense Meritorious Service Medal, two Meritorious Service Medals, six Navy and Marine Corps Commendation Medals, three Navy and Marine Corps Achievement Medals, the Military Outstanding Volunteer Service Medal and a host of other decorations.

Despite the challenges she has faced in the Marine Corps, Falco said she always strives to think positively and to be a good person, mother and Marine. She said she has one main lesson that she hopes to leave the Marines around her.

"It is so important to know the difference between judgement and character,” Falco said. “Many things can affect our judgement. To err is human. We learn from our mistakes. We pick up and we move on – resiliency and recovery; but to be who you are, that is your choice. Be known as someone of good character. That is something you own and others don't forget."

Falco will soon retire after 34 fruitful years in the United States Marine Corps.

“I’ve just been privileged to be allowed to be a Marine,” Falco said. “I still love it as much as the day I came in, and I would stay in forever, but I want to make room for others to climb the ladder and at the same time, contribute to society in another capacity, and spend time with my daughters.”