7 Reasons Why Marines Love Chesty Puller So Much 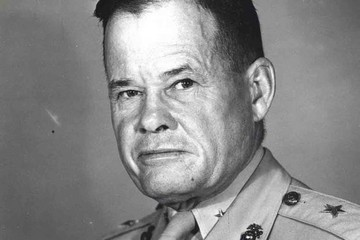 Even Chesty couldn’t explain why he picked up the nickname. Born Lewis Burwell in 1898, the man who would retire as Lt. Gen. Puller almost denied the United States Marine Corps one of its most legendary heroes by trying to join the Army in 1916.

The Corps should hang a portrait of Martha Puller in the Marine Corps Museum for refusing to allow him to join the military before he was old enough.

Lewis was the kid who grew up listening to the romantic stories of the Civil War. These were not just stories about the big names of men who led armies and won battles. Puller grew up listening to the personal tales of the Veterans who fought in those battles. He wanted to have stories of his own. He probably never thought he’d be the most decorated Marine ever -- or that telling him goodnight would be a Marine Corps slogan for the next century (or more).

Here are just a few more facts about Lt. Gen. Lewis B. “Chesty” Puller that will explain the Corps’ love for this one man.

1. He’s Relatable to Every Marine.

No matter what kind of Marine you are, Chesty’s been there. He’s the Marine’s Marine because he’s been both officer and enlisted, served on both active duty and the Reserves and in peacetime and in war. Chesty Puller, who died in 1971 at the age of 73, did it all in his 37 years of service.

He not only worked his way up from private to lieutenant general; he had to earn a commission twice. He first attended Virginia Military Institute but wanted to get into World War I so badly that he enlisted and went to boot camp at Parris Island. He never made it to Europe, but he went to NCO training and officer candidate school. Despite pinning on second lieutenant, postwar force reductions meant he got bumped back to corporal and sent to the Reserves.

Some historians tend to gloss over those years between World Wars I and II as the “interwar years” when it comes to the United States, but it was an important and busy time for United States Marines. Puller was sent to Haiti, where he fought some 40 battles with Haitian rebels and earned his promotion to second lieutenant.

Puller later was sent to the occupation of Nicaragua, where he earned his first two Navy Crosses fighting Sandinista rebels over some three years. He commanded Marines in China and in the United States before World War II and the Korean War kicked off.

3. He Really Is the Most Decorated Marine.

Although he never was recommended for the Medal of Honor, the United States’ highest award for valor in combat, he doesn’t need one to be considered the most decorated Marine ever. Over the course of his four wars, countless engagements and instances of solid leadership, he earned more than his share of chest candy.

He was awarded the second-highest award six times, five Navy Crosses and one Army Distinguished Service Cross, along with the Silver Star, two Legions of Merit with combat “V,” a Bronze Star with combat “V” and three air medals -- just to name a few.

4. Chesty Is Also the Most Quotable Marine.

If not the most quotable U.S. military officer ever. Which is saying a lot, considering U.S. military personnel used to say the coolest lines all the time, as if they had their own team of writers. None of them ever will come close to the bon mots Chesty Puller used to drop, even in official correspondence during a war:

5. He Didn’t Let His Fellow Marines Down.

Letting down a Marine was, in Puller’s words, the worst thing you could do as a Marine. And when the stuff hit the fan, he really lived those words. At Guadalcanal, three companies of his Marines were cut off from the main force by a much larger Japanese force. Marines tried to break through to them, but some believed they were lost.

Nope. Puller went out to the beach to flag down the U.S. Navy destroyer USS Ballard and organized a relief force to land on the beach again. He also coordinated the destroyer’s guns to shell the Japanese, allowing the trapped Marines enough latitude to make an escape. A week later, Chesty and his Marines came back to this part of the island and wiped out the Japanese defenders.

6. Chesty Puller Did Not Accept Defeat.

Later in the fight for Guadalcanal, Chesty’s battalion of Marines and a battalion of soldiers from the U.S. Army’s 164th Infantry Regiment fought and held Henderson airfield on Guadalcanal from a larger Japanese force. Despite being outnumbered, they held the field, inflicting a heavy toll of more than 1,400 casualties on the enemy.

The intensity of the fighting earned Puller his third Navy Cross. He recommended two of his own Marines for Medals of Honor during the firefight, one of them being Marine Corps legend John Basilone.

7. He Was Not Intimidated by Anything.

When Puller and his Marines landed at Inchon during the Korean War, the North Koreans held much of the peninsula. The United Nations forces were landing deep behind enemy lines and faced the possibility of being pushed back into the sea. The Marines didn’t flinch and were moving and fighting within a day.

Looking at a potential combat death in the face didn’t stop at Inchon. When the Marines advanced within mere miles of the Yalu River, North Korea’s border with China, the Chinese intervened. A massive force of Communist soldiers surrounded the Marines at the Chosin Reservoir. Massively outnumbered, Puller was quoted as saying, “We've been looking for the enemy for some time now. We've finally found him. We're surrounded. That simplifies things."

It wasn’t just bravado, the Marines fought their way south while putting so much hurt on the Chinese that nine out of the 10 attacking divisions never saw action again.