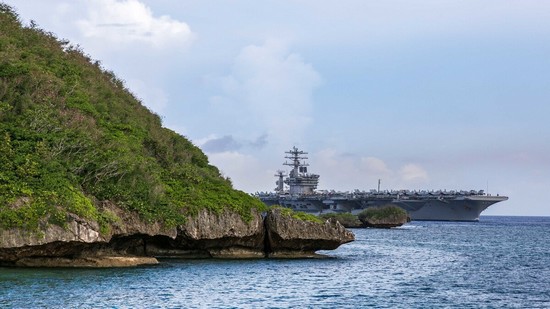 Roughly 11,000 bombs and other munitions were dropped on Guam in World War II, but never detonated.

Decades later, the U.S. Defense Department is still struggling to clear out unexploded ordnance and other discarded munitions on the strategically vital South Pacific island used by the Navy and Air Force, according to a Defense Department Inspector General report released last month.

“Hazardous munitions have been found around Guam ranging from 20-millimeter projectiles to 1,000-pound bombs and including both U.S. and Japanese ordnance,” investigators wrote.

Failures to properly fund and plan for military construction-related clearance missions have impacted operations and safety on the island as well, according to the IG.

Joint Region Marianas, the DoD command that oversees Guam, “did not properly plan and manage” the clearing of unexploded ordnance or “consistently implement safety standards and quality assurance controls” for the endeavor, all of which impeded military construction projects there, the IG found, resulting in roughly $100 million in cost increases from Fiscal Year 2015 to Fiscal 2017 alone.

The island’s main military installations are Naval Base Guam and Andersen Air Force Base.

Failures to plan and budget for such clearance had real-world repercussions, according to the IG.

Andersen Air Force Base personnel risked not being able to receive enough fuel for “extended contingency operations” due to one project’s delay, the IG found, and some Air Force personnel had to store munitions in locations where they wouldn’t be immediately available should large-scale conflict break out.

The vice commander of the Air Force’s 36th Wing in Guam told investigators that construction delays due to DoD rigidity on ordnance safety standards meant the service “is not able to construct the infrastructure to maintain and protect the assets in the region, including protecting aircraft and establishing redundancy, as demonstrated by the lengthy schedule delays in completing projects on Andersen Air Force Base.”

The vice commander, who is not named in the report, also lamented that China doesn’t need to operate by such environmental or safety concerns, as evidenced by Beijing building artificial islands and a 3,000-meter runway on Fiery Cross Reef in the South China Sea from 2014 to 2016.

“Andersen Air Force Base officials stated that in the time that U.S. adversaries built the artificial island and the runway, the U.S. military on Guam could not complete (unexploded ordnance) clearance for a single MILCON project, such as the maintenance hangar projects or the fuel pipeline,” IG investigators wrote.

The problems revealed in the IG’s report are not new.

Officials with the Naval Ordnance Safety and Security Activity, or NOSSA, had assessed Joint Region Marianas’ explosive safety standards during several visits from 2015 to 2018 and found problems, yet the command did not implement prescribed reforms, the IG found.

“NOSSA personnel determined that the (unexploded ordnance) clearance process on Guam had resourcing deficiencies and developed visit reports stating their findings, which included a lack of designation of unexploded ordnance qualified personnel, failure to set up exclusion zones when conducting a surface sweep, and failure to conduct quality control at acceptable levels,” according to the IG. “As of January 2019, (Joint Region Marianas) officials had not implemented corrective actions to address the deficiencies.”

Navy officials were unable and sometimes unqualified when it came to keeping track of unexploded ordnance and munitions discovered on the island, according to the IG, and contractors sometimes provided “potentially inaccurate information” to military officials.

Navy policies were rigid and didn’t allow Joint Region Marianas officials a way to manage risks related to clearance or obtain deviations from explosives safety standards in a timely manner, nor did officials offer alternatives “that could potentially reduce safety risks to contractors,” according to the IG.

DoD also failed to enact plans that would manage clearance requirements and safety concerns around the military construction projects on Guam, and contractors did not always report the discovery of unexploded ordnance in a timely manner, the IG found.

Officials didn’t factor in how long such ordnance clearance efforts would take and didn’t develop military construction budgets to reflect these costs, according to IG.

When choosing companies for military construction contracts, Navy officials didn’t clearly define clearance expectations in contracts, nor did they evaluate how past contractors had performed in such activities.

Navy officials told investigators they have struggled to recruit qualified officials to oversee such clearance activities due to Guam’s lack of qualified hires and the costs involved in flying personnel to the island.

The IG noted that some areas have improved already, but investigators called for the DoD to issue better guidance for estimating and presenting unexploded ordnance clearance costs so officials can better budget for those costs on military construction projects, and for the Navy to explore whether a better path exists for handling “deviation requests” by local commanders so as to reduce further schedule delays and cost increases.

The IG also called for the Navy to review equipment and staffing levels for better contract oversight.

The deputy assistant secretary of defense for infrastructure agreed with the recommendations, as did Navy officials.

IG will close out those recommendations when the relevant offices provided documentation that they have implemented policy changes.