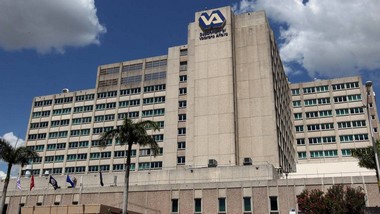 Frederick Currie served eight years in a Florida prison for molesting an 18-year-old woman on his rounds as a police officer at Florida International University. The university had three times tried to fire him after arrests. A psychological exam commissioned by the university found him prone to dysfunctional relationships with women and branded him “unfit for duty.”

After Currie was released from prison in 2014 and added to the state’s registry of sex offenders he was hired by the Department of Veterans Affairs in Miami as a pipefitter in the engineering department at the hospital. He passed a federal background check to get the job.

But Kimberly Wallace, a housekeeper at the hospital, said she knew none of that history when she filed a complaint last November accusing Currie of exposing himself to her and demanding that she perform a sex act. She said she only learned about Currie’s past from a co-worker after administrators’ initial investigation cleared Currie of wrongdoing. As part of that initial investigation, Wallace completed a mediation process, but she said the only concession offered to her was that she switch to a new shift — for less pay — to avoid Currie.

After the mediation, Wallace decided to pursue a longer, formal investigation, which is still ongoing. But last month Wallace left her $27,444.05-a-year job at the VA in anger and frustration. Currie, who made $61,462.16 last year, remains.

“I was the whistle-blower and I was a victim,” Wallace told the Herald. “I felt like they let me down.”

The Herald spoke with multiple co-workers with whom Wallace had discussed the alleged incident. Wallace also provided the Herald copies of VA documents filed in connection with her complaint.

Wallace is not alone in saying that she experienced sexual harassment at the VA. Roughly one in five VA employees reported that they had faced incidences of it in the previous two years, according to a 2016 survey of federal employees. That was the highest percentage of any federal agency. The numbers are higher for female employees — roughly one in four reported in the same survey that they had experienced sexual harassment.

Wallace said she had come to expect unwanted attention and solicitations at work from male co-workers. But she had expected more support after the treatment she said she experienced from Currie.

In her complaint, Wallace said the incident occurred on the afternoon of Monday, Nov. 2, 2020. She said that Currie approached her and exposed himself to her.

According to her complaint, she told him to “put that away” and walked toward a nearby women’s bathroom. Currie, a former college football player and a U.S. Marine, followed her in and tried to show her a picture of his genitalia on his phone, the complaint said.

Wallace told the Herald she had been raped at the age of 17 and Currie’s aggression triggered her memories of the incident.

“I was like, ‘Not here, Lord. Give me the strength,’ ” she recalls thinking.

In a panic she said she shoved Currie out of the bathroom and told him to leave her alone.

She said he then asked her if she was going to “give him some.”

Wallace said she didn’t know what to make of the incident at first, but when she told a colleague what had happened her colleague advised her to report the incident.

“That was a lie,” Currie said, when asked about Wallace’s claims about his behavior. “I don’t have anything to say about that. That was unsubstantiated. That investigation was closed.”

Currie said he believes that Wallace was a disgruntled employee and that she targeted him because of his past.

That past is the prison sentence he served for molesting a young woman while making the rounds on his old job as a police officer at FIU.

According to the arrest record, Currie came upon a young couple parked near Tamiami Park, which FIU officers sometimes patrolled, around 1:30 a.m. The couple later told the FIU police department they had come there to have sex.

Currie pulled up next to them and demanded that they get out of the car. When a search of their car for drugs turned up nothing, he first searched each of them separately. According to the arrest record, he demanded that the young man drop his pants and remove his underwear, saying that the search was “procedure.” When the man refused to remove his underwear, Currie pulled back the waistband and shone his flashlight inside to look, records state.

He next searched the young woman, first patting her down, sticking a hand up her skirt, before penetrating her with a finger. After that, he touched her breasts and pulled up her shirt to expose them.

Currie then delivered a lecture to the couple about the dangers of using a secluded parking lot as a venue for sexual encounters and repeatedly admonished the young woman, asking her if her mother would be OK with her being there. After Currie left, the young woman told state prosecutors she burst into tears.

Currie was unresponsive to police dispatchers after the stop, and according to a subsequent court filing never reported the stop.

Currie was ultimately convicted of sexual battery by a law enforcement officer. He was sentenced to 10 years, but released after eight.

His career was spotlighted in a 2011 investigation by the Sarasota Herald-Tribune of how police officers kept their jobs despite arrests — in Currie’s case one involving domestic violence, the other child abuse — and other so-called “moral character violations.” Currie’s domestic abuse case was dropped by prosecutors when he agreed to do counseling and he was acquitted on the child abuse charge.

FIU had tried to fire Currie multiple times, but his dismissals were overturned in arbitration. After an arbitrator ruled in Currie’s favor in 2003, Robert Norton, the Veteran labor attorney representing FIU, called it “the worst decision” he had ever seen in his career.

“I thought the evidence was so overwhelming that this guy should never be entrusted with the role of law enforcement officer,” Norton, a partner at the Miami office of Allen Norton & Blue, told the Herald-Tribune.

Amid the evidence presented by FIU in seeking Currie’s dismissal in 2003 was a psychological evaluation that found him “unfit for duty” and prone to dysfunctional relationships with women, resulting in “volatile and sometimes violent episodes with these women.”

The evaluation added that Currie was adept at covering his tracks and winning sympathy from others.

“In this sense, he may be manipulative and shrewd in knowing how to beat the system,” the report concluded.

‘THE AGENCY WAS ON NOTICE’

Wallace said she only learned of Currie’s past from another co-worker after she had already completed the mediation offered by the VA in response to her informal complaint.

For harassment complaints, the standard practice is for federal employees to first resolve the issue informally through a counseling process , which frequently involves mediation and a short internal investigation. If that is not successful, employees can file a formal complaint that triggers a lengthier investigation by an outside party.

Shannon Leary, an employment lawyer who has brought sexual harassment cases against other VA hospitals, said that the administration wasn’t under any obligation to inform Wallace about Currie’s past, but that his past offenses do have a bearing on the VA’s potential liability.

“The agency was on notice so to speak given the employee’s background,” she said.

When Wallace entered the mediation process, she hoped that Currie would be suspended, forced to attend counseling and kept away from female employees as a consequence for his behavior, but she said the only resolution offered by the mediators was that Wallace switch to a different shift that paid less to avoid Currie. But Currie was cleared of any wrongdoing and he faced no penalty.

Referring to the incident, Wallace said that when Currie moved across the hall when she first approached him, he also moved out of view of a camera mounted in the hallway, which Wallace believes was a deliberate choice on the part of Currie, who knew the layout of the hospital well.

Wallace went through the mediation process without any representation. She approached the representative for the local branch of the American Federation of Government Employees union about the possibility of him representing her during mediation but was told that because of a shortage of union representatives he would also represent Currie. She declined, even after another union official later told her the national office for the union could step in to help.

The VA declined to say what evidence it considered in deciding to clear Currie in its initial investigation. It provided the following statement in response to questions from the Herald about the inquiry and Currie’s background:

“The Miami VA Healthcare System is committed to creating a safe environment for all employees in our mission of caring for Veterans. All allegations of sexual harassment are taken very seriously and a full investigation was conducted immediately upon leadership being notified by the employee, including consulting with the VA Office of Inspector General, City of Miami Police Special Victims Unit and U.S. State Attorney Office. Although the investigation resulted in no evidence of harassment, immediate steps were taken to ensure both parties would not be in contact during their working hours and that support services were offered. In addition, all Miami VA staff are subject to federal background investigations and are expected to treat all Veterans, staff and guests in VA facilities with respect and dignity.

“There are no specific policies or restrictions on our employees once they pass a comprehensive background check. All allegations of wrongdoing or harassment are investigated, and if evidence is found the case is referred for administrative or criminal action as appropriate.”

When asked what would be considered disqualifying on a federal background check, the VA pointed to guidelines from the Office of Personnel Management, which indicate that “Criminal or dishonest conduct” could make a job candidate “unsuitable.” Ultimately, the VA’s personnel security adjudication center determines whether an applicant’s past offenses would be disqualifying.

“If significant derogatory information comes to light ... as a result of a background investigation, the recency and conduct are factors considered by the adjudicator to determine an employee’s suitability,” a spokesperson for the VA said. “If not cleared by personnel security, the tentative offer is rescinded.”

Wallace decided to file a formal complaint in early February through the VA’s Office of Resolution Management, Diversity & Inclusion. Resolution is still ongoing. But she said that the experience took a psychological toll. While Wallace’s complaint was being investigated ahead of the mediation process, she said Currie was moved to a different shift where he didn’t overlap with Wallace. But after the mediation was completed, she said Currie was moved back to his old shift — the same one Wallace worked. No one told Wallace that Currie would be coming back, and when she saw him at work in early February she said it triggered a panic attack.

Wallace said she feels betrayed by the VA.

“You all chose to protect my abuser,” Wallace said. “Not in one description of my job does it say I was going to be violated and become a victim.”