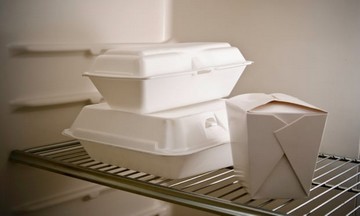 Despite mounting evidence of the chemicals’ toxicity, a similar bill that passed the House was filibustered in the Senate

Bipartisan legislation introduced this week in Congress would ban PFAS “forever chemicals” in US food packaging and significantly reduce exposure to the highly toxic compounds, supporters say, but its passage is far from certain as a fight with industry allies in the Senate looms.

PFAS are a class of compounds that are used across dozens of industries to make products resistant to water, heat, stains and grease. The chemicals are especially common in food packaging because they repel grease and liquid, which prevents paper products from disintegrating.

They get their nickname because of their immense longevity in the environment.

“We cannot continue to be poisoned by these chemicals,” said Michigan Democratic congresswoman Debbie Dingell, who introduced the bill in the House. “Chemical manufacturers are going to try to get senators to stop PFAS from being banned, but there’s enough data that shows that it’s a threat to people … so we need to do something.”

Researchers have found PFAS are frequently used in sandwich wrappers, paper straws, baking papers, carryout containers and molded fiber products like “clam shells”. The chemicals have been detected in products from a range of businesses, including fast food restaurants like McDonald’s, Subway and Chipotle; grocery chains like Whole Foods; and independent restaurants and grocers that use packaging products marketed as “green”.

PFAS are also commonly applied to nonstick aluminum wrap and in bulk plastic containers used to store flavorings. Studies show that the chemicals can leach from packaging into food and are linked to cancer, liver disease, kidney problems, decreased immunity, birth defects and other serious health problems.

“People don’t realize that the chemicals are coming in contact with food that they’re eating and that’s a way that PFAS is getting into their bodies,” Dingell said.

Despite mounting evidence of the chemicals’ toxicity over the last 10 years, a similar bill that passed the House last legislative session was filibustered in the Senate, though it’s unclear who killed it because Senate rules allow members to anonymously filibuster.

PFAS manufacturers have spent heavily on lobbying and campaign contributions in recent years, and public health advocates say industry’s efforts have paid off. Last session, chemical company allies in the GOP defeated about 100 other pieces of legislation designed to reign in the chemicals’ use, and Donald Trump had promised to Veto any that made it through.

“It’s the dark and invisible hand of big money in politics,” said Erik Olson, a lobbyist for the Natural Resources Defense Council, which supports the new proposed ban.

Among industry allies who have opposed PFAS legislation is Senator Jim Inhofe, who sits on the environmental committee and has received at least $60,000 from PFAS producers, including $14,000 last session that was donated as legislation was referred to committee.

Senate armed forces committee member Thom Tillis last session cast the deciding vote against legislation that would have helped hold PFAS manufacturers accountable for pollution around military bases. Chemical giants DuPont and Honeywell donated to his campaign in the days after the vote.

Advocates say they expect similar opposition this time around, despite growing public pressure to act.

“I don’t think the chemical or food packaging industries are retreating even though there’s mounting evidence that there’s a lot of the chemical in food packaging,” Olson said. “Clearly there’s a big problem with an evenly divided Senate and the opportunity to filibuster.”

Even if Congress fails to pass the ban, similar legislation has been enacted in seven states, including in California, New York and Vermont, though most only prohibit the chemicals’ use in paper products, not plastic. Several other state legislatures are considering similar bills, which advocates say is putting pressure on industry to stop using the chemicals.

Companies like Chipotle, Freshii, McDonald’s, Panera Bread, Sweetgreen, Trader Joe’s, Wendy’s and Whole Foods have committed to stop using packaging with the chemicals. But Olson said PFAS in food packaging “is an issue that’s not going away”, even if legislation fails again.

“Until we get toxic forever chemicals out of our food supply, there will continue to be mounting pressure to move legislation,” he said.