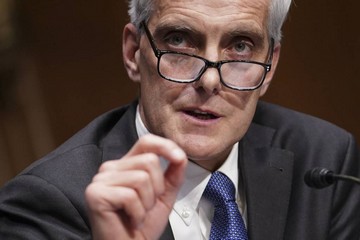 Veterans Affairs Secretary Denis McDonough said he is “frustrated” by his department’s slow pace of expanding benefits for military burn pit victims but insists that federal rules limit his ability to move quicker on the issue.

In an interview on “The Problem with Jon Stewart” hosted by comedian Jon Stewart, McDonough said he wants to expand the list of burn-pit-related illnesses eligible for presumptive benefits soon, but is facing internal obstacles to do that.

“The biggest hurdle is establishing a scientific link, and I will be damned if I don’t establish that,” he said. “We do operate within the context of a series of requirements, and we have not yet been able to meet the requirements.”

In August, VA officials announced for the first time that Veterans suffering asthma, rhinitis and sinusitis who were exposed to toxic smoke while serving in Iraq, Afghanistan and other recent conflict locations will be granted presumptive benefit status.

That allows them to more quickly receive medical and financial assistance from the department, without having to prove specific injury details.

Veterans groups have called the action a small first step in helping the estimated 3.5 million exposed to toxic smoke from burn pits during overseas deployments over the last 20 years. But they have also emphasized that the department needs to move quicker to recognize rare cancers and other illnesses caused by the toxic exposures, to assist Veterans suffering now.

Stewart has been a vocal champion of the issue in recent years, appearing at multiple Capitol Hill rallies alongside Veterans advocates to push for legislation to speed up the process.

He dedicated the first episode of his new show to the topic, featuring interviews with Veterans suffering from the health effects of their deployments and the sit-down in McDonough’s office to push for a quicker response from VA.

“From what I’ve seen, [researchers] have done a ton of National Academy of Science studies, and people waive those all the time and say that no links have been established [between burn pits and Vet’s illnesses],” Stewart told McDonough.

Lawmakers have proposed legislation to get around those federal rules and award benefits to burn pit victims quicker. Senate Veterans’ Affairs Committee Chairman Jon Tester, D-Mont., and ranking member Jerry Moran, R-Kansas, spoke with Stewart on a podcast accompanying the episode and said they are still hopeful that work can be completed soon.

The two senators said the biggest stumbling block for the bill now is getting a potential cost estimate from VA, so lawmakers can adequately budget for a flood of new cases.

Stewart’s show is the latest push from advocates in recent months to emphasize the long-term problem from burn pits outside the military community, in the hopes of making meaningful reforms this year.

Tester said he thinks that is possible, but vowed to continue the legislative push in 2022 if need be.