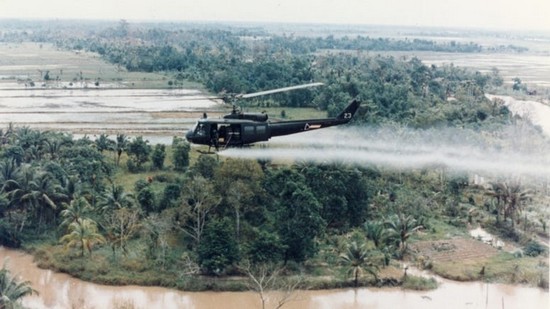 That decision could provide disability benefits to tens of thousands of Veterans and their families, to the tune of $15.2 billion.

In a report sent to the House and Senate Veterans Affairs committees Monday and obtained by Connecting Vets, VA Secretary Robert Wilkie said his experts disputed the findings of the National Academies of Sciences, Engineering and Medicine (NASEM).

NASEM scientists previously determined that there is evidence connecting bladder cancer, hypothyroidism, hypertension and Parkinson’s-like symptoms to exposure to the toxic herbicide.

But Wilkie said VA experts “noted significant concerns and limitations” with NASEM scientists’ findings, alleging that NASEM included “no definitive causal links” between the toxin and the four diseases in their findings.

Wilkie specifically mentioned that two of the four illnesses -- bladder cancer and hypertension, or high blood pressure -- have “many alternative risk factors” such as diet, tobacco use, genetics, age and race.

NASEM scientists also used members of the Army Chemical Corps for its “most rigorous study,” which “does not necessarily reflect the experience of the general population of Veterans deployed to Vietnam” because the Chemical Corps were known to have a higher exposure to Agent Orange, Wilkie said in the report.

The cost to extend VA benefits to cover those illnesses would likely run from $11.2 billion to $15.2 billion, depending on a pending court decision.

Wilkie and VA previously said the agency has no plans to decide on the four diseases until the completion of VA’s own in-house studies, the results of which aren’t expected to publish until late this year at the earliest.

“The soonest the secretary would be able to consider adding any new presumptive conditions is in late 2020,” the report said.

“For far too long, the Trump administration has failed to acknowledge the tens of thousands of Vietnam Veterans who, as a result of their service, are continuing to suffer the detrimental effects of Agent Orange," Tester said in a statement to Connecting Vets. "Instead of justice, these Veterans have been subjected to unwarranted delays, and are consistently denied access to the critical care and benefits they desperately need. This report is particularly troubling because the administration is denying the overwhelming scientific evidence that has already been put forth, and is instead changing the rules by seemingly forcing Veterans with bladder cancer, hypothyroidism, Parkinsonism, and hypertension to meet a different — perhaps unattainable — standard. For these Veterans and their families, this is absolutely unacceptable.”

Two years ago, then-VA Secretary David Shulkin decided to add more diseases to the VA's list of health concerns that qualify a Veteran for Agent Orange disability benefits. According to documents obtained by a Veteran through the Freedom of Information Act and provided to Connecting Vets, White House officials stood in Shulkin's way expressing concern about the cost of covering additional diseases and requesting more research. Military Times first reported on the documents.

Expanding the list of health conditions presumed to be caused by Agent Orange exposure could provide disability pay and health benefits to more than 83,000 Veterans.

Repeated attempts by Connecting Vets to get an update from VA officials on whether the department had a forthcoming decision have been consistently met with the same statement: "VA has no announcements on Agent Orange presumptive conditions at this time."

A list of the diseases currently linked to Agent Orange and eligible for benefits can be found here.