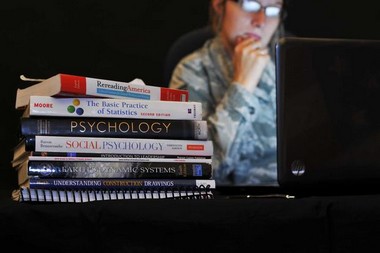 Most major Veterans service organizations are urging Congress to support a provision in the COVID-relief package to terminate a GI Bill loophole they say encourages for-profit schools to scam and recruit Veterans with predatory tactics.

But getting rid of the loophole faces a last-minute challenge. Sen. Rick Scott, R-Fla., is fighting the provision, sources with direct knowledge said. He is going to introduce Amendment 941, which would strip the provision out of the package, his office confirmed.

On Friday, the Senate starts a series of tough amendment votes on the $1.9 trillion relief bill that could extend late into the night. The long stretch of votes is known as a vote-a-rama, during which senators will introduce many amendments to the relief package to add or eliminate elements such as the 90/10 provision.

Democratic Sens. Kirsten Sinema of Arizona and Joe Manchin of West Virginia are wild cards with the 90/10 vote, a source with direct knowledge said. Neither senator's office responded to a request for comment.

On Friday, 31 Veterans advocate groups and military organizations penned a letter to the Senators stressing the need to close the so-called 90/10 loophole. Currently, for-profit schools must collect at least 10% of their revenue from non-federal sources.

"Closing the 90/10 loophole has long been a top priority for military and Veteran serving organizations," the letter states. "This is even more imperative now as COVID has increased predatory colleges' targeting of military-connected students."

The letter was signed by most major Veteran and military groups such as AMVETS, the Iraq and Afghanistan Veterans of America, and the Military Officers Association of America.

After more than a decade of some lawmakers and advocates pushing to gut the loophole out of law, Democrats attached the provision to the massive COVID-relief package. As with a lot of bills passed through Congress, unrelated measures are often attached for easier passing into law.

To make the 90/10 provision easier to pass, a deal was brokered Thursday night between Sen. Patty Murray, D-Wash., the chairwoman of the Senate Committee on Health, Education Labor and Pensions, and Sen. Richard Burr of North Carolina, the top Republican on the committee. It would delay implementation of the loophole closure by six months, a source with direct knowledge of the situation said.

The 90/10 rule doesn't count the GI Bill as federal revenue despite being earned on duty and paid out by the Department of Veterans Affairs. This gives for-profit colleges an incentive to recruit Veterans to stay in business, Veterans advocates have argued.

The for-profit school industry rejects that characterization, saying some institutions might have to raise prices and it could be more difficult to accept new student Veterans if the 90/10 rule is gone.

"It is unconscionable to exploit the COVID-19 relief bill as a vehicle to deny Veterans and active-duty service members the right to use their earned benefits on the career school of their choice," said Jason Altmire, CEO of Career Education Colleges and Universities, an industry group that represents for-profit institutions. "Congress should focus on stimulating the economy instead of including provisions that will be harmful to Veterans, active-duty service members, and low-income students."

In 2018, the VA inspector general warned that the agency could waste $2.3 billion in payments to "ineligible colleges" over the next five years. In the majority of cases, the wasted payments would go to for-profit universities.