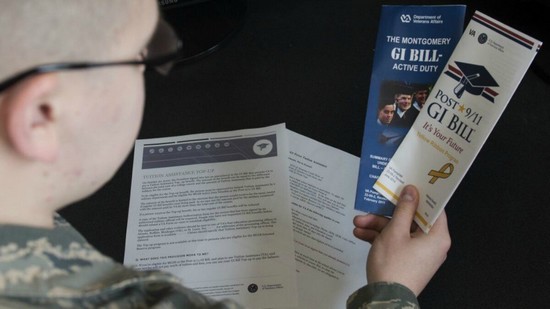 But a Veterans’ advocacy group says the VA’s decision amounts to an attempt to “ignore federal law in order to protect predatory colleges.”

“The only winners today are the schools that used their money and political influence to evade the law and harm Veterans,” said Carrie Wofford, President of Veterans Education Success, in a statement. “The GI Bill statute specifically requires VA to protect student Veterans, but the Trump Administration has chosen to defy that law.”

In March, VA officials sent the schools letters threatening to suspend their eligibility, based on findings by the Federal Trade Commission and state attorneys general about the schools’ practices. Officials cited a law that prohibits the use of deceptive or misleading advertising, sales or enrollment practices. Officials gave schools 60 days to take corrective action, and subsequently provided two 30-day extensions.

VA regional offices notified the five colleges of the decisions on July 2, stating the matters had been resolved to their satisfaction.

Among the actions she cited:

“VA will continue to act in the best interest of our nation’s service members, Veterans and taxpayers, and we look forward to working with these schools to ensure they fulfill the requirements for GI Bill enrollments,” Noel said.

However, the fact that the schools took action to resolve prior legal issues isn’t enough to justify allowing them to continue to accept GI Bill students, contends the Veterans Education Success nonprofit advocacy group. The group contends that by law, if VA becomes aware of deceptive recruiting practices of an institution, then the VA must not approve the enrollment of a GI Bill student at that institution.

Jeremy Butler, chief executive officer of the Veterans advocacy group Iraq and Afghanistan Veterans of America, agrees. “It was disappointing to see the VA so quickly reinstate these five schools,” Butler said. “I don’t think they were fully transparent in what they were requiring of the schools.”

The VA should ensure that the changes not only ensure the schools are not continuing with the same behavior in the future, but that they “really learn the real lesson about properly taking care of our military and Veteran students,” Butler said.

“This sends a signal to all schools that they can use deceptive practices to take advantage of GI Bill users to get their money in the door and to use that to further programs that may or may not be providing a real educational opportunity.”

The University of Phoenix and its parents company, Apollo Education Group, reached a settlement with the FTC for $191 million to resolve charges they had used deceptive advertisements that falsely touted their relationships and job opportunities with companies such as AT&T, Yahoo!, Microsoft, Twitter, and the American Red Cross. According to the VA, the University of Phoenix has been the largest recipient of Post 911 GI Bill benefits since the program began.

Career Education Corporation, the previous parent company of both American InterContinental University and Colorado Technical University, reached a $30 million settlement with the FTC and an additional settlement of nearly $500 million with 49 states on charges the CEC used deceptive lead generators to market its schools. The lead generators told potential students the schools were affiliated with or recommended by the military.

Here are the corrective actions the schools have taken, according to the VA letters:

A lawsuit filed in federal court in Pennsylvania alleged that Temple’s Fox School of Business made false, deceptive and misleading statements to U.S. News and World Report regarding the ranking of its Online Masters of Business Administration program, from 2014 through 2017. University officials later discovered similar problems with several other masters programs in the school of business.

A complaint filed by the Nebraska State Attorney General in federal court against Bellevue alleged that from May 2012 to March 2016, the school made false, deceptive, and misleading statements to prospective and then-current students regarding the accreditation status of its registered nurse (RN) to bachelor of science in nursing (BSN) program and the value of a BSN degree from an unaccredited nursing program. The complaint alleged that the RN to BSN program was not accredited before October 2017.