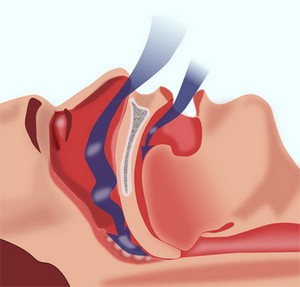 People with more severe obstructive sleep apnea and reductions in blood oxygen concentrations are more likely to have elevated concentrations of triglycerides in the blood, according to new research.

“Obstructive sleep apnea (OSA) is a syndrome characterized by partial or complete obstruction of the upper airways, resulting in intermittent hypoxia, variably accompanied by sleep fragmentation and daytime sleepiness,” said Professor Gary Wittert, from the Freemasons Centre for Male Health and Well-Being at the University of Adelaide and his colleagues.

“In male participants of the Swiss HypnoLaus cohort, the prevalence of moderate-to-severe OSA was 49.7%, with 74.7% men aged 40 or over having OSA syndrome.”

“However, OSA is often underdiagnosed and unrecognized in clinical settings.”

“OSA has been implicated in the development of cardiovascular conditions, however, OSA during rapid eye movement (REM) sleep and the resultant nocturnal hypoxemia are also longitudinally associated with cardiovascular disease and associated risk factors such as hypertension, insulin resistance, metabolic syndrome, and carotid atherosclerosis.”

“Animal models suggest that this increased cardiovascular risk is the result of intermittent hypoxemia leading to activation of the sympathetic nervous system, increased oxidative stress and systemic inflammation.”

“The results of our study are concerning because the most striking effects were seen in people who were not overweight.”

The study involved 753 people from the Men Androgens Inflammation Lifestyle Environment and Stress Study (MAILES), a comprehensive assessment of the health of Australian men aged 40 and over.

Half of the participants were shown to have moderate to severe OSA, with 75% of men aged 40 or over having some form of the syndrome.

“The key message from this study is that testing for OSA should be considered even in lean men with elevated blood triglycerides concentrations,” Professor Wittert said.

The authors believe continuous positive airway pressure therapy (CPAP) delivered via machine overnight may be beneficial in reducing concentrations of triglycerides and the symptoms of OSA.

“Further studies are needed to evaluate the relationship between OSA and triglycerides in women and young men and assess the effectiveness of CPAP treatment for these groups,” Professor Wittert said.

The team’s paper was published in the journal Nature and Science of Sleep.