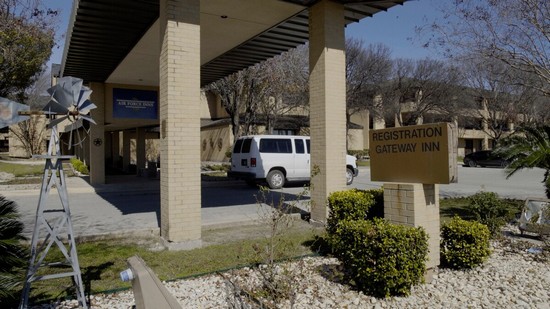 As the number of U.S. COVID-19 cases rise and more Americans are being tested for the virus, communities near military installations where travelers are quarantined are asking why suspect patients can’t stay on base for testing.

The two say the requirement is “counter to prudent management of a contagion in a quarantine environment.”

“The threat of moving patients to other destinations like hospitals or the Texas Center for Infectious Disease unnecessarily poses risk to Joint Base San Antonio personnel through exposure, in addition to the community at large,” they wrote.

At Travis Air Force Base, Calif., the city of Costa Mesa blocked an effort to move coronavirus patients to an empty facility in the town that once served developmentally delayed patients called the Fairview Developmental Center.

The town requested a temporary restraining order to prevent the move from occurring — a motion granted Feb. 22 by a U.S. District Court judge.

On Friday, the government announced it would not pursue the effort, primarily because most of those in isolation at Travis are at the end of their 14-day quarantine.

The Department of Health and Human Services and the Centers for Disease Control and Prevention instituted a quarantine plan in early February that placed evacuees from Wuhan and elsewhere in China in isolation at several military installations across the U.S.

A new round of evacuees arrived in mid-February from the stricken cruise ship Diamond Princess, which was docked for weeks under quarantine in Yokahama, Japan.

Under an agreement, the Department of Defense provides lodging for those under quarantine while CDC and local health agencies conduct daily medical screenings for signs of the virus. If a case is suspected, patients are transported to local hospitals for testing, observation and treatment.

While Nirenberg and Wolff said they understand the need for evacuees to be transported to “prevent active duty personnel from contracting the virus, thereby affecting military combat readiness,” they added that the current system of isolation is better than moving patients to be tested.

“It is our understanding that evacuees are already isolated from military personnel and that testing and evaluation capabilities exist on base. As such, we believe the transports present an unnecessary risk to both the military and the community.”

According to the letter, 6 of 235 evacuees from Wuhan and the Diamond Princess cruise ship at San Antonio-Lackland have required hospital care, but at least 18 people have been transported off-base for testing and hospitalization with mild or no symptoms.

The situation, they said, has “filled valuable beds with patients which could appropriately be managed in isolation at Joint Base San Antonio Lackland,” they wrote. “We respectfully request that the DoD permit on-site CDC medical staff to collect test samples.”

Pentagon spokesman Army Lt. Col Christian Mitchell confirmed Esper’s receipt of the letter but did not respond to Military Times’ request for comment.

DoD is posting its updates on the coronavirus on its own home page.

At Travis Air Force Base, the CDC planned to move potential patients to Costa Mesa due to a shortage in hospital beds near the installation, located in Fairfield, Calif.

But Costa Mesa Mayor Katrina Foley said she wasn’t informed of the plan that included her city 400 miles south of Travis.

“This is at least a temporary victory for the citizens of Costa Mesa and Orange County,” Foley said in a statement to the Los Angeles Times. “But the government has not promised not to place future infected persons there, so the battle is not over. We will continue to ask the court to prohibit the government from using this completely inappropriate facility for housing people infected with a highly communicable and potentially fatal disease.”

At Travis, at least 11 quarantined passengers have been transferred to nearby medical facilities for testing. Five additional passengers were transported to hospitals for monitoring. One patient has been determined to have the virus.

As of Monday, there were two confirmed cases of COVID-19 in Solana County, including the first possible “community transmission” of the virus. A woman in Vacaville, eight miles north of Travis, was confirmed to have the coronavirus, despite not having come in contact with any known infected individuals or a history of recent travel.

A second Solana County resident, a health care worker who treated the woman, has contracted the virus as well.

As of Sunday night, according to the CDC, the U.S. has seen 91 cases of the virus, including 48 among those evacuated from China by the U.S. State Department and Diamond Princess passengers. Seventeen individuals have been hospitalized and six have died, beginning March 1, including a man in his 50s with underlying medical conditions in King County, Wash. Five others have died, all in Kirkland, Wash., which is in King County.

Among U.S. military personnel and family members, a U.S. Forces Korea soldier and his wife have tested positive for the virus, and the widow of a military retiree also living in South Korea contracted the virus last month.

The virus has now infected more than 90,000 worldwide and killed at least 3,000 people, mainly in China.

Chairman of the Joint Chiefs of Staff Gen. Mark Milley said Monday that the “overall broad impact to the uniformed U.S. military [has been] minimal.”

“It’s not surprising because we have a very young demographic, young health demographic, lots of vaccinations, etc.,” Milley said.

He added while there is not currently a vaccine for the COVID-19 coronavirus, military research laboratories are working with partner agencies on a vaccine.

Abroad, U.S. Department of Defense schools in Italy, Bahrain and South Korea remain closed, as do many on-base morale, welfare and recreation facilities.

In the U.S., commanders also are monitoring their local communities to determine what steps, if any, may be needed to to protect troops and their family members, according to Milley.

“We are making all due preparations to protect our bases, camps and stations ... We’ve got lots of capabilities — medical capabilities, housing that if required by the secretary of defense we will do our part,” he said.