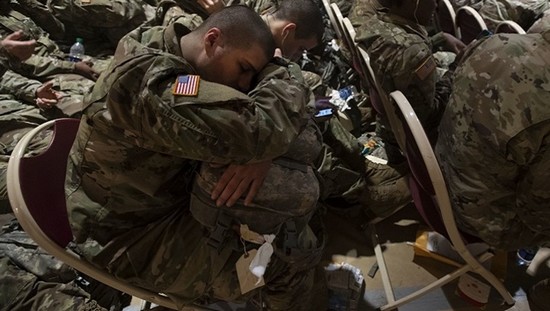 Amidst growing concern about COVID-19 infection, health officials have provided several recommendations to help individuals protect themselves and their families from infection, including washing hands regularly and maintaining a distance of at least six feet from anyone who is coughing or sneezing. Fortunately, a growing body of evidence suggests that an additional lifestyle modification could also dramatically improve your odds of avoiding infection – getting more sleep.

It has long been known that sleep is important for military performance. The Walter Reed Army Institute of Research has conducted sleep studies since the 1950s, showing that sleep loss negatively affects emotional regulation, judgment, cognitive performance, learning and memory, psychological resilience and reaction time – each of which could be critical for success in multi-domain operational environments—and almost all other environments as well, from the athletic field to the classroom to the boardroom. This is why elite athletes make sure they obtain 8-10 hours of sleep per night: to acquire that extra “edge” that can make the difference between success and failure.

In addition, and of particular relevance given current concerns about the spread of COVID-19, recent evidence suggests that sleep is also important for healthy immune function and the ability to fight off infection. "From a Soldier lethality perspective, we often state 'sleep is ammunition for the brain', as sleep is critical for decision making, vigilance and reaction time. When it comes to fighting the common cold and flu, sleep is your internal body armor that helps you fight some viruses and disease," said Army Col. Deydre Teyhen, Commander of the Walter Reed Army Institute of Research.

The relationship between sleep and infectious disease is now being explored by researchers across the world, and several interesting and important findings have been reported. For example, in one study, volunteers without previous exposure to the common cold were exposed to a live sample of the virus. Researchers found that no variable predicted whether a participant would fall sick better than sleep duration – not even age or stress level. In other words, those who habitually slept less were more likely to fall ill with the cold virus.

Perhaps most surprisingly, it has also been found that six months after receiving a hepatitis B vaccination, individuals who slept fewer than six hours on the night prior to vaccination were at significant risk of being unprotected compared to those who had obtained more than seven hours of sleep.

In addition, there is now limited but exciting evidence from animal studies suggesting that sleep not only helps protect against initial infection, it also plays a direct role in aiding recovery from infectious illness.

"Sleep is critical for maintaining physical, cognitive and immunological dominance on and off the battlefield. Leaders must prioritize sleep as a valuable asset in maintaining readiness and resilience, especially in the context of multi-domain operations and increased health risks worldwide—including those risks associated with exposure to infectious diseases," says Army Lt. Col. Vincent Capaldi, director of the Behavioral Biology branch at WRAIR, responsible for studying the relationship between sleep, performance and military effectiveness.

Unfortunately, approximately one in three American adults do not obtain the American Academy of Sleep Medicine-recommended 7+ hours of sleep per night, a situation that is estimated to cost the US economy approximately $411 billion a year due to increased errors and accidents, lower productivity and increased absenteeism. And the problem is particularly pronounced in the military, where approximately two in three Soldiers average six or fewer hours of sleep a night.

WRAIR sleep and infectious disease researchers are also jointly exploring the relationship between sleep and immune function – a natural collaboration since the WRAIR infectious disease research programs are among the best in the world, having contributed to the development of many FDA-approved vaccines and every existing FDA-approved malaria prevention drug. Furthermore, WRAIR’s world-renowned sleep and performance research program has generated several technological and knowledge products, including wrist actigraphy (a precursor to current smart watch technology) to reliably measure and quantify sleep in the field; human functional brain imaging studies that have furthered scientific understanding of sleep and sleep loss and the discovery of “sleep banking”: the finding that extra sleep prior to a mission with sleep loss blunts the performance decrement and reduces the amount of sleep needed to fully recover afterwards.

As medical countermeasure development efforts progress, obtaining at least seven hours of sleep per night in a comfortable, cool, quiet, dark and safe area, in addition to regular handwashing with soap and water and maintaining a healthy social distance (6 feet), will continue to constitute the first line of defense against infection.