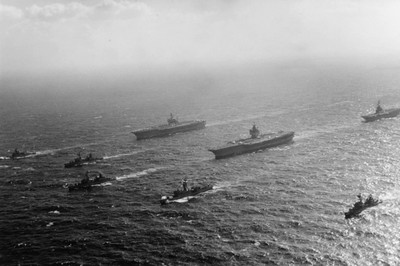 In a move that should speed up disability claims for some Vietnam Veterans, officials announced Monday they have completed digitizing thousands of deck logs from ships stationed offshore during that war, enabling researchers to better determine where troops served and what toxins they may have encountered.

Completion of the project is the culmination of more than a year of work between Veterans Affairs and National Archives and Records Administration officials. The move was prompted by legislation passed in summer 2019 mandating VA award presumptive benefits status to Veterans who served in the waters off Vietnam during the war there five decades ago.

Department officials said they have awarded roughly $641 million to more than 22,524 blue water Navy Veterans or survivors since the start of this year. But advocates have estimated that as many as 90,000 Vietnam Veterans may be eligible for those payouts, and the digitized deck logs are expected to help with that application process.

In a statement, VA Secretary Robert Wilkie said the move should make it easier for Veterans “to receive the benefits they’ve earned without burdening them with paperwork.”

At issue is how the department had handled claims related to Agent Orange exposure during the Vietnam War.

Under previous VA rules, service members who were stationed on the ground or on ships near the coast were presumed to have had exposure to the chemical defoliant and other carcinogenic herbicides. When illnesses arose later in life and they applied for disability claims, their claims were approved without requiring additional documentation.

But because of scientific disputes over the level of exposure to those toxic chemicals in the seas around Vietnam, the so-called “blue water” Veterans who served on ships offshore were not granted the same preferential status by VA.

As a result, they were required to provide specific proof that their illnesses later in life were related to their military service, and in some cases told to find ship logs proving that they had spent time in the waters around Vietnam.

Advocates for years lamented that the level of documentation was an unfair burden on aging and infirm Veterans. Lawmakers agreed, passing the legislation last year and mandating VA’s efforts to update the decades-old records.

Work on the Navy deck logs was completed in late 2019, before VA began awarding the blue water Veteran claims. But work on Coast Guard deck log digitization wasn’t completed until this month.

“Through this scanning project, VA contractors digitized declassified Navy and Coast Guard deck logs from 1956-1978 in NARA’s holdings, including the log of the hospital ship USS Sanctuary which I served aboard during the Vietnam conflict,” David Ferriero, Archivist of the United States, said in a statement Monday.

“As a Veteran from this era, I recognize the unprecedented value this provides to Veterans making these logs easily accessible online.”

NARA is making the newly-digitized records available to researchers, Veterans advocates and other groups.

VA officials have encouraged Veterans, dependents and surviving spouses looking to file a claim related to the records to contact an approved Veterans service organization for help with the process.