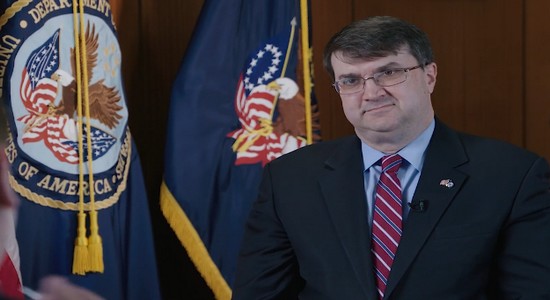 VA Secretary Robert Wilkie this week encouraged House Speaker Nancy Pelosi to pass bipartisan legislation to help VA build partnerships with community groups who can offer direct help to Veterans who are at risk of harming themselves.

The IMPROVE Well-Being for Veterans Act, from Reps. Jack Bergman (R-Mich.) and Chrissy Houlahan (D-Pa.) would allow VA to direct grant funding to these groups across the country.

These community-based groups would be able to use that funding to identify Veterans who pose a suicide risk.

“H.R. 3495 is one-way Members of Congress from both parties can support Veterans and their local communities, and I believe it can be the beginning this year of a longer-term collaboration with the VA to get at the root causes of the suicide crisis in the nation,” Wilkie wrote to Pelosi in a letter last week. “I hope your caucus can support this bipartisan effort.”

VA has had success partnering with community groups to prevent Veteran homelessness — and those efforts have been highly successful — three states and 77 communities have effectively ended this problem. VA is optimistic that strengthening these partnerships through new grant funding would lead to similar success in preventing Veteran suicide.

Secretary Wilkie also extended an invitation to meet with Speaker Pelosi about the bill.