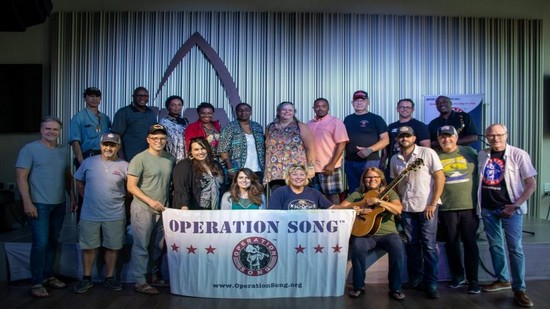 For three days in August, 10 Veterans found their way to Nashville, Tennessee, for an incredible songwriting journey.

For each, this would be a once-in-a-lifetime opportunity to become a storyteller, songwriter, and soul-bearer in partnership with some of the finest musicians in country music. Perhaps some found the language of a lyrical melody to be a comfort unlike anything before or a chorus that set their heart and mind free. New songs that struck a chord with the Veterans and creative teams will eventually make their way from the Nashville studio to an infinite audience.

Operation Song began in 2012 “to empower Veterans to tell their stories through songwriting.” Founder Bob Regan, who is one of Nashville’s most successful songwriters and producers, began working with local Tennessee Veterans at the VA Medical Center in Murfreesboro to help, “…give them some order, perspective, and validation…of chaotic events and emotions of war.” Mr. Regan’s chart-topping hits include songs performed by popular artists like Billy Ray Cyrus, Keith Urban, and Trisha Yearwood.

For USMC Veteran Dan Maderic, who served in the military 50 years ago during the Vietnam War, the experience with Operation Song was “finally a welcome home.” This was Maderic’s first time to Nashville and he said they were all treated like royalty. “We were included in the whole process. The artists and songwriters broke down barriers and I felt welcome to talk. I said a lot of things I’ve never said before and laid it all out… it was a moving experience.” Maderic participates in an ongoing program at home in Salem, Va., called “Guitars For Vets,” but he said this experience was beyond his expectations. “Everyone was just amazing.”

For Jay Horrigan, the experience with Operation Song was “priceless.” The retired Army sergeant said he felt they were treated like kings and queens of the city. “Everyone was so welcoming and our housing and food were also donated in addition to the studio time with writers and musicians.” Horrigan was taken to a recording studio where country music artists Vince Gill and Garth Brooks have recorded  music. “It was a low key, chill, lounge vibe. I was able to tell stories that I’ve never told anyone before. It felt vulnerable [and] was a long day of hard work, but also very rewarding.” Horrigan hopes that the message of his work–coping with Veteran suicide–will provide listeners with hope and encouragement.

When Veterans were finished telling their stories, songwriters helped turn those stories into lyrics, musicians put them to music, and the rest is production magic.

One of the ten songwriters who helped turn these stories into song was Jason Sever.

Sever is one of the creative minds behind Dustin Lynch’s number one hit “Seein’ Red.” Sever said the experience was humbling. “A lot of times in songwriting we don’t see any immediate results from what we do in a co-write room… but here you see an instant magic, if you will. When you sit down with a person, when you share a part of your soul and a part of your life with them and then you see what the song does, you see the power of music in real time… it’s pretty amazing.”

Veterans who are chosen to participate in the Operation Song program apply with the help and recommendation of ongoing therapists at their local VA.

“This non-profit organization facilitated the opportunity for these Veterans to engage in a meaningful form of creativity and self-expression, outside of the clinical setting,” said Lisbeth A. Woodward, the music therapy director at Salem VA. “The caliber of song-writing professionals, musicians, and recording professionals who worked with our Veterans was extraordinary and the experience irreplaceable. I highly recommend this opportunity for those Veterans who possess the coping skills to share their stories through this dynamic medium.”

VA Secretary Robert Wilkie acknowledged the value of programs like Operation Song to the evolution of Veteran care. “VA is committed to exploring new and innovative ways to care for Veterans. This includes using creative arts therapies in conjunction with community partners to help Veterans express themselves when conventional therapeutic methods may not be enough.”

At the end of the weekend, the participants performed their new songs for a live audience.  To date, Operation Song has helped hundreds of Veterans and their families, and has produced over 750 songs. Funding for this year’s Veteran retreat program is through the generous support of the Veterans Canteen Service.

To find out more information on Operation Song, visit: www.operationsong.org