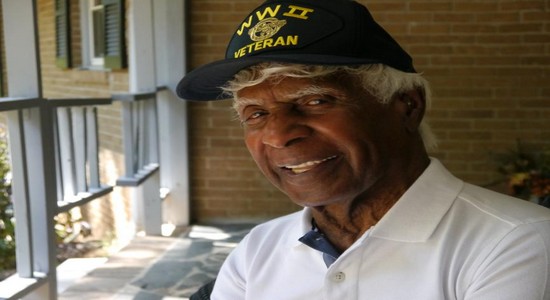 Yes, there are memories of the terrorist attack on the U.S. 18 years ago. But it’s also his birthday, and the World War II Veteran will hit a milestone today.

“I’m doing pretty good,” he said after stepping carefully out onto the front porch of a daughter’s Powder Springs house to chat.

He was in his second year at Lincoln University, a historic black college in central Missouri, when the attack on Pearl Harbor came. President Franklin D. Roosevelt had enacted a peace-time draft the year before. Williams was home in Kansas City for Christmas break when he received his draft notice by mail.

He was inducted in January 1942 and released in November 1945, having served 22 months in the European campaign.

The war was an inflection point for African-Americans. The prejudice that constricted his life before the war was alive and well in the Army. But what prejudice took away, the demands of the war began to slowly give back. The country needed millions of the men and women doing thousands of jobs.

In 1941, fewer than 4,000 African-Americans were serving in the military and only 12 had become officers, according to the World War II Museum. By 1945, more than 1.2 million African-Americans would serve in uniform. Though most black units were given support roles behind the front lines, the wartime needs and lobbying by civil rights groups and supporters saw black units begin to take leading positions — such as Gen. George S. Patton’s 761st tank battalion, which fought in four major campaigns, including the Battle of the Bulge.

Williams trained at Fort Sill, Okla., and shipped out of Fort Leavenworth in Kansas as part of the 9th Calvary Regiment, an African American unit with a history dating to 1866.“I was in the cavalry, but not a cavalryman,” Williams said.

He was trained as an administrator in battalion headquarters, handling everything from payroll to personnel. He rose to the rank of sergeant. As his black unit rode trains to the East Coast to embark for north Africa, soldiers had to sit in the back cars and keep their window shades pulled down. His fading memory still retains that unfair treatment of his men, who were going overseas to fight for freedom for others.

It was not until 1948, when President Harry S. Truman issued Executive Order 9981, that a policy of racial equality in the U.S. military was established, though it would take years to implement.Williams said he had a job to do, despite conditions.“

We were all in it together,” he said.

The 9th Calvary landed in North Africa in 1944, according to regimental history.

Williams remembers seeing the French ships that had been sunk in the harbor of Casablanca. He recalls the poor state of the locals who had been living under German occupation, and he remembered being strafed by German planes while encamped. Part of his regiment was sent to support other divisions in Europe. Williams was among them.

His daughter, Zarle Williams, traveled back to Europe to see some of the places he described, but Williams said he got enough his first go round.“