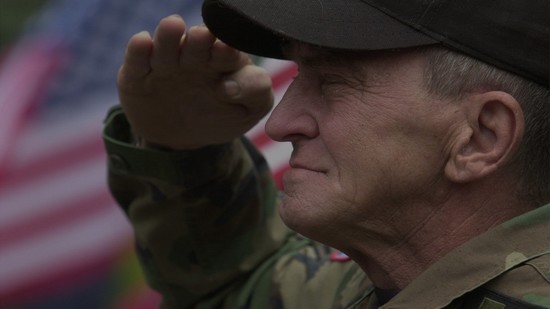 Helmets to Hardhats helps people transition from military to civilian life, one Vet at a time.

When Michael Szabla entered the Marine Corps, he thought it would be forever. However, his tours abroad as a combat engineer took their toll and, after four years of service, he returned to civilian life.

Ready to start anew, he went through a weeklong transition assistance program where the message was clearly, “Take your GI Bill and go to college.”

But that wasn’t going to happen.

“I had no desire to go to college,” Szabla, 28, says. “I spent my entire deployments outside, not in an office. I couldn’t imagine sitting in a classroom, and then if I had to go to a cubicle job, I knew I would lose my mind.”

It’s a tough transition around 200,000 service members go through every year. After spending years taking orders — told where to go, what to do and even when to go to bed — they suddenly need to make their own decisions about their futures. Additionally, many lack skills that easily translate to civilian jobs; the ability to shoot at enemy combatants or defuse bombs aren’t applicable to most positions. Experts also cite Veterans' high incidence of post-traumatic stress disorder and substance abuse as reasons for difficulty with the transition. An estimated 1.4 million U.S. Veterans are below the poverty line.

However, the Chicago resident considers himself lucky: He now has a job with an enviable paycheck, retirement savings and insurance ensuring both his physical and mental health — invaluable for combat Veterans. Plus, as a pipefitter apprentice, he finds the job challenging and fulfilling.

He says other Veterans can do the same if they only knew where to go.

“When I got out of the Marine Corps, I was looking for something to give me purpose again, to fill a void,” he explains. “I found this and it filled that void pretty quickly. Sometimes when I go downtown to see a Blackhawks game, I will see a building and think ‘I helped build that.’”

Szabla found out about the opportunity through Helmets to Hardhats, a nonprofit organization which helps to bridge the gap between Veterans that need careers and employers who have a surplus of well-paying skilled labor jobs.

While Szabla feels like he lucked out, Helmets to Hardhats Executive Director Darrell Roberts says that most Veterans can follow similar routes and more would if they just knew the opportunities existed. He sees his job mostly as spreading the word.

“We want to take luck and chance out of the equation,” Roberts says. “We want to make the odds greater than you learn about this at a time where you can make an informed decision.”

Helmets to Hardhats was started in 2003 by retired Marine Major General Matt Caulfield, who came up with it after a chance meeting with Joe Maloney of the AFL-CIO. Now, more than 10,000 Veterans around the country use their services each year to find what Roberts calls meaningful work.

Recent Department of Labor statistics show a shortage of skilled trade labor, largely a result of a booming economy, a low unemployment rate, a high rate of retirement among older workers and an increase in college degrees held by younger Americans who aren’t interested in physically demanding work. Millions of those jobs in the coming years might go unfilled, many with six-figure earning growth potential.

Meanwhile, according to research by the University of Southern California, nearly 70,000 Veterans are homeless — almost 10 percent of the total number of Vets — and they are twice as likely to be living on the streets. This is despite the fact that many employers say they value their work ethic and team spirit, valuable traits learned during military careers solving problems in demanding and even dangerous situations.

Szabla, for example, carries his combat engineer philosophy to his new job where, he says, the team spirit reminds him of his service days.

“There's an incentive to work hard,” he explains. “If you work hard, you're going to get rewarded for it. We're not here just punching a clock. You get to put your name on what you're doing, and, at the end of the day, you get to look and say, ‘I did that.’ That’s what I get out of it, personally.”

On the other side, union apprenticeship programs provide all the necessary training to get them the skills they need and also provide an income in the process, creating “earn while you learn” opportunities. However, starting apprenticeship jobs regularly pay less than $20 per hour, a very unappealing prospect for Veterans like Szabla.

“Most of these kids that join, they're 18, and they're right out of high school,” Szabla explains. “They have time to save up money and get a house or an apartment or something. For me, I was 25, I was in the Marine Corps, I was living on my own. I had led men into combat. The last thing I wanted to do was go live back with my parents to save money.”

Instead, Szabla learned from Helmets to Hardhats that he could supplement that income with the GI Bill, bringing his total income to more than $40 per hour, enough to “get on my own and get my own place and start my life instead of starting from zero prior to the military.” Every six months, Szabla has received a raise, after which his GI payouts decreased. In a couple of years, he will make full journeyman pipefitter with Chicago Local 597, at which point his job will pay his full salary.

Roberts points out that with all of the encouragement for Veterans to use their GI Bills for college tuition, most don’t even realize they can use them this way.

“The training is free, and apprentice programs pay 50 to 70 percent of what a journeyperson makes,” Roberts explains. “The GI Bill pays the difference so, under this model, they receive a check and can use it for whatever they needed, whether it was to buy groceries, putting [it] in the bank or pay a mortgage bill.”

Tabetha Andino, a single mother and an Army Veteran, left the Army in 2002 but spent time taking care of her sons, now 16 and 11. Two years ago, she felt ready to return to the workforce and decided to become a mason apprentice.

It didn’t take long for her to get started.

“They only offer the start once a year, but I got to bypass the waiting [because of Veteran status],” Andino, 37, explains. “It took just 30 days from when I signed up to my first class. Then, after three weeks, they send you out to a site. You are sent to work immediately.”

Andino is particularly thankful for her steady hours. Knowing she has kids, her employer doesn’t schedule her for night shifts. She’s also very thankful for the high-level benefits that enable her to take care of her sons, one of whom was diagnosed with juvenile diabetes.

“Without the medical they give me, I would never have been able to get the right doctors,” she says.

That doesn’t mean she won’t take the opportunity to get overtime when it’s available, often meaning she heads to the site as early as 3:30 a.m.

“In a nutshell, I’m the sole provider,” she explains. “For women it’s a little harder because we have to make sure that our home is good. Thank god I have a company that works with me for my children. I would never have been able to take care of my children the way I can now.”

She says she often tells service members ready to make the transition about her union, Local 79, and the kinds of jobs that are available that offer the same “tight knit camaraderie” they experienced in the military and the kind of medical insurance they need.

For Roberts, these kinds of stories show how valuable a little guidance can be.

“Every transition is different,” he says.

The trades, he says, offer a good alternative, and he hopes the military will start talking them up more. A Navy hull technician who eventually eschewed the college route to work with sheet metal, he understands the population he serves.

“[In the military], you're used to a family environment, part of a big effort and you're trying to work toward an outcome or goal. When you come out of that, there's that period of culture shock and you feel a little lost and, on top of that, you also need to start a new career with new people. Every year we hear success stories, and one of the things that I’m most thankful for is when I hear that they found another family.”